Cosmic Voices from Bulgaria, with Conductor Gancho Gavazov, is among the most popular Bulgarian folk choirs. It a  is a brilliant example of Bulgaria’s arts on the international cultural scene.  Founded in 1994 by producer Emil Minev, for more than 20 years the choir has been investing its efforts and energy towards the preservation of folklore traditions and the high professional level of Bulgarian choir performing art.

After the untimely demise of producer Minev, the project’s development has been continued by his daughter, Elena Mineva-Pierlot, as well as by delegated producer Stoyan Jelev and the choir’s manager – Dimitar Elenski.

The choir’s singers have outstanding professional training and master in the stylistic diversity and sonority of folk singing from all ends of Bulgaria. These are some of the best soloists and performers in the country and have been carefully selected after scrutinizing auditions. The special attention and care in working with these talented voices build the quality of the artistic product and shape its specific sound. 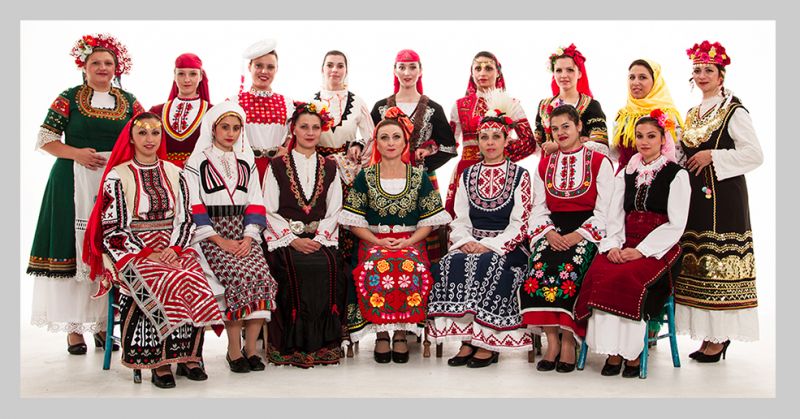 Cosmic Voices from Bulgaria possesses a rich artistic history. The choir has participated in numerous musical festivals and film productions:

1999 - The Colors of Sound, Directed by Svetla Fingova, BNT

2002 -Oh Tell Me, Little White Cloud, a film about the Bulgarian opera prima Vesselina Katsarova with the participation of the Cosmic Voices from Bulgaria.

During the years, Cosmic Voices from Bulgaria has built on its experience and confidence thanks to collaborations with many outstanding artists and composers. Among them are: the conductors Vanya Moneva and Nadezhda Ivanova.  Thecomposers Krassimir Kyurkchiyski, Acad. Nikolai Kaufman, Theodossi Spassov, Prof. Alexander Tekeliev, and Marek Dyakov  have composed music especially for this choire. Among the artists who have worked with the formation are Prof. Stefan Dragostinov, the folklore singers Nadka Karadjova, Stoyana Lalova, Pavlina Gorcheva, Boyka Prisadova, Yanka Taneva, Tzvetanka Varimezova; and opera singers Vesselina Katzarova and Ina Kancheva.

Today, the choir of Cosmic Voices from Bulgaria  under Conductor Gancho Gavazov, embodies the vigor of the eternally young Bulgarian folk song. Inspired by the infinite diversity of Bulgarian culture and drawing on the powerful energy that accompanies every new beginning, their performances become an emotional journey, an expression of the spirit and a recreation of the innermost feelings and thoughts of our predecessors. The richness and mellifluence of the sound bring exceptional pleasure and quickly become an unforgettable experience. The love for both art and folklore, the high professionalism and amazing dedication of the performers succeed in preserving and promoting the Bulgarian folklore, which is an infinite and immeasurable world cultural heritage.